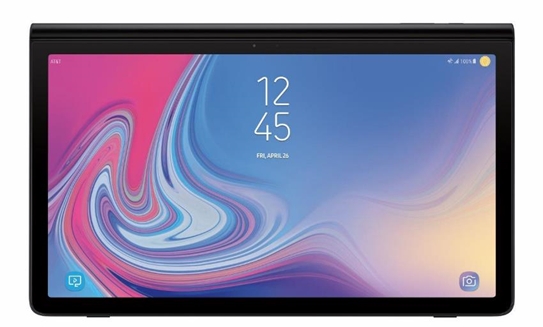 At the end of January, we discovered a GeekBench listing of a giant tablet prepared by Samsung, called the Galaxy View 2, a 17.5-inch screen device with a mid-range hardware package. Now a few months further, we get to see a couple of leaked renders of the device that brings a dedicated kickstand.

Although of low resolution, these images allow us to see how the tablet looks from the design point of view. We have generous edges around the screen and the kickstand that allows the device to be used in different angles.

We no longer have a handle like the first 18.4-inch Galaxy View, probably due to the diagonal drop that has helped transport the device. Based on information previously seen online, we know that the tablet comes with just 3 GB of RAM and a Exynos 7885 mid-range processor.

Samsung may launch Galaxy View 2 in both Wi-Fi Only and one version equipped with 4G LTE support. The pictures here are listed April 26, probably the day the tablet will be officially announced!

The post Samsung Galaxy View 2, the Giant 17.5 inch Tablet Shows Up in Renders Before Launch appeared first on Tablet News.